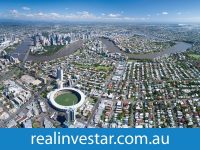 We’ve been saying it for a while so it’s great to see the ‘experts’ agreeing – if you’re searching for the next property hotspot look no further than Brisbane, and to a lesser extent Adelaide.

Unlike its eastern state counterparts, Brisbane has only experienced marginal house price growth over the past 5-7 years. However, with Melbourne and Sydney house prices now in decline investors have begun shifting their focus to the Greater Brisbane markets, which includes Brisbane, Ipswich, Logan, Moreton Bay and Redland.

So if you missed out on profiting from the recent Melbourne and Sydney house price boom you definitely won’t want to miss the opportunity to invest in Brisbane. In fact, prices are already well and truly on the rise in some suburbs so the window of opportunity is already starting to close.

Just like the price growth in Melbourne and Sydney this really is a once-in-a-decade opportunity to get in at the right time and ride the wave. In fact, Brisbane property prices are much more affordable and the rental yields are higher. What it means is you’re able to buy cash-flow positive property which now has the potential of achieving double digit price growth. That’s what I call that the best of both worlds!

So where to from here?

If you want to make sure you get in to the Brisbane market before prices take off we can help. We have hand-selected a range of cash flow positive [+$100 to $200 pw] house & land packages, including duals occs and duplexes, in the very best growth areas of Greater Brisbane.

For more details and to explore these investment options, please email sam@realinvestar.com.au or call me on 0411 431 391 for a chat.

If you’re serious about setting yourself up for the future, make sure you take action!

As the property market slows in Sydney and Melbourne, experts have pegged this capital city as the best to invest with a boom on the horizon.

Brisbane has been in line as the next capital to boom for a long time but it could finally be the city’s time to shine, with predictions it will soon be leading the property growth charts.

The River City is the hot favourite for investment, according to the latest Property Investment Professionals of Australia (PIPA) survey with 44 per cent of respondents believing it is the capital city with the best prospects, up from 43 per cent last year.

About 26 per cent picked Melbourne, down from 32 per cent last year, while only 8 per cent chose Sydney as having investment potential.

PIPA chairman Peter Koulizos says with growth just around the corner, now is the time for investors to be buying in Brisbane.

“If you’re looking at a time frame of five to seven years, Sydney is not the place to go, because it’s already had its big rise, and Melbourne is the same,” he says.

“Hobart has got another one year to 18 months of steam left in the tank and it will flatten out and Perth is really not going to do too well until the price of iron ore goes up.

“From a property cycle point of view, which has a big impact on prices, it’s time for Brisbane and Adelaide to shine. 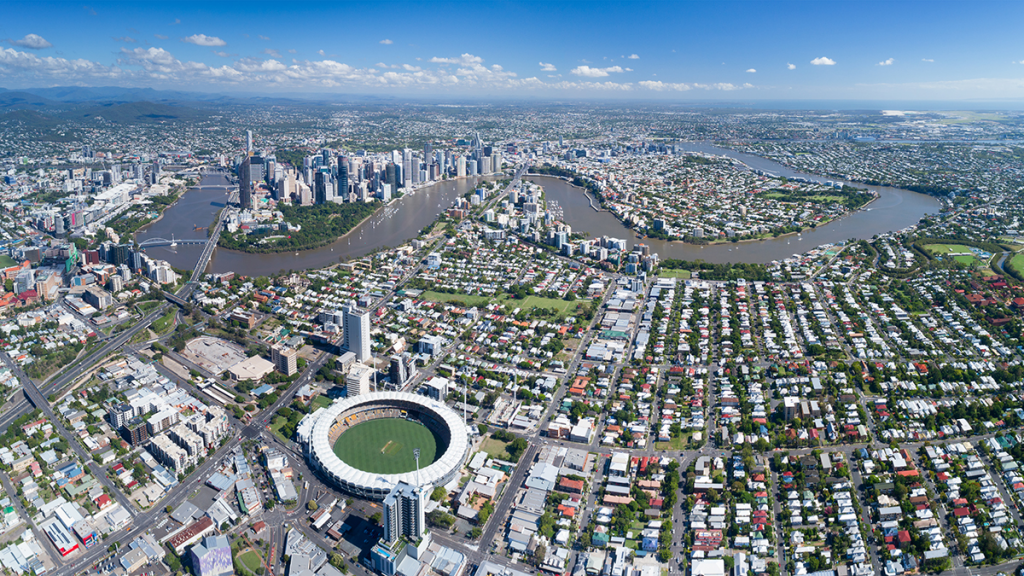 “I’ve been saying that for years and nothing has happened, but sooner or later – and more sooner than later – you will see Brisbane and Adelaide at the top of the capital growth tables.”

“The perception amongst investors I speak to is that the Brisbane market is still very affordable when compared to Sydney and Melbourne and there is a strong feeling it has not yet reached its peak,” she says.

“Our population is growing, our infrastructure is improving and as a result, employment prospects in our city are strong.

Brisbane is notably ‘growing up’ and being recognised as a stand out capital city in its own right, rather than a second cousin of Sydney and Melbourne, with which it has long been associated.”

Russell says Brisbane is likely to see a jump in average house prices across the city as these developments are completed.

“To get into the market while prices are affordable and interest rates are still low would be a smart move,” she says.

In recent times, Brisbane has maintained steady and sustainable growth, with the latest data from the Real Estate Institute of Queensland showing house prices grew by 2.5% over the past year to reach a new record median of $673,000.

Brisbane and Adelaide has “done nothing” since the GFC about 10 years ago, according to Koulizos.

He says the longer the period of inactivity, the better the upswing of the property cycle will be due to pent up demand – and the bigger the price rises.

He says the biggest growth driver of the Brisbane market is migration of people from New South Wales to Queensland, which generally happens at the end of a Sydney property boom. 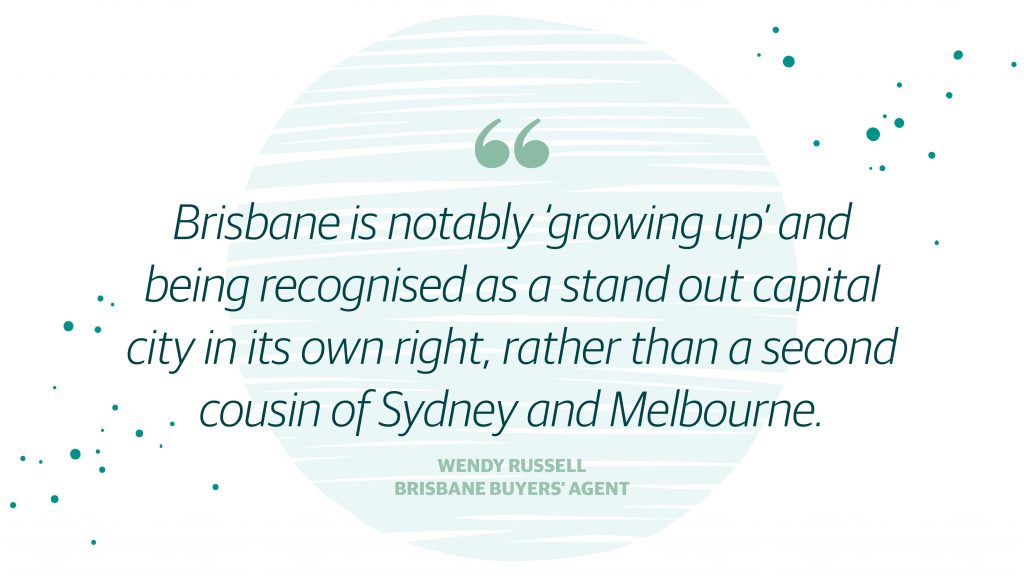 It’s largely retirees who move, he says, to a more affordable location, where their money will go much further.

While interstate buyers – particularly retirees – are fuelling the property market in Brisbane, Koulizos says investors are more likely to be locals identifying the value in the market.

Investors from Sydney and Melbourne have experienced a fall in confidence aligning with a significant fall in property values in those cities, he adds, despite Brisbane experiencing steady and stable growth.

Across the board, investors in Australia have been less active in recent times due to a range of factors including uncertainty around prices and interest rates, and tighter lending restrictions.

The latest data from the Australian Bureau of Statistics (ABS) found the value of investment housing fell 1.3 per cent to $10 billion between June and July 2018, reaching a five-year low.

But Suncorp Head of Stores and Optimisation Chris Fleming says investors are continuing to be active in Queensland, not just in the Brisbane market, but in the growth corridor between the capital and the Gold Coast.

“As property prices continue to fluctuate in Sydney and Melbourne, more interstate investors could see Brisbane as a more attractive investment opportunity,” he says.

While lending has tightened up across the board, and particularly for investors, Fleming says lenders see Brisbane as a more stable investment environment than other capital cities. The steady and stable growth in prices, with no huge falls, also means lenders can be more certain about how much people can borrow.

“We’ve seen a lot more stability in Brisbane versus Sydney and Melbourne in recent months, so the opportunity for people in Brisbane to understand their equity position and work out what their lending potential looks like is more consistent,” he says.

For investors, rental yields in Brisbane are around 4.5%, compared to around 3% in Sydney and Melbourne, which also makes the city a more attractive prospect for lenders. 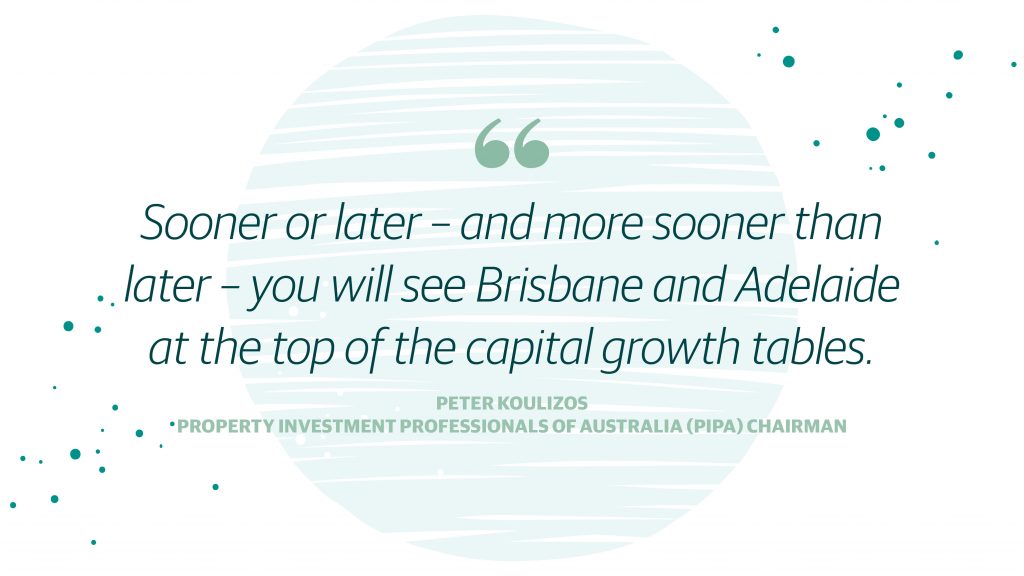 Fleming says the investment lending environment is more complex than it has been before, and that has the potential to impact people’s confidence in both buying and selling.

The recently released Suncorp Home Index survey found 60% of people nationally currently have no plans to buy, sell or renovate their home, rising to 62% in Queensland.

“The lending environment and a discussion around property prices makes people think twice about what is the answer for them, and many are holding onto what they’ve got,” he says.

But caution isn’t necessarily a bad thing, adds Fleming.
“People are considering their financial position carefully and are spending more time planning what that looks like in the future, which will set more people up for success,” he says. “The tighter focus on lending – and specifically customer’s capacity to repay – will continue to be a focus in financial services, and I think that’s important.”

For those that do get into the market, risk reduction strategies such as landlord insurance, which helps to protect landlords from financial loss relating to renting their investment property, is a key part of any investment plan, says Fleming.

“Landlord insurance is crucial for any investors, to give them peace of mind that their investment is protected, especially when the investment is in another capital city altogether.”

Apart from investors, first homebuyers are also quite active, says Fleming, with the Suncorp Home Index survey finding 11% of respondents are looking to or in the process of buying their first home, with 71% working towards buying by saving a deposit.

Recent data from the ABS also found the level of first homebuyers is the highest since 2010.

“There’s renewed optimism in having the ability to buy your first home,” Fleming says.

Russell says first homebuyers in Brisbane are opting for townhouses closer to the city – within 10 kilometres – around the $500,000 price bracket, as well as existing houses handy to transport.

This article was originally published by The Courier Mail here – https://www.couriermail.com.au/feature/special-features/brisbane-is-next-to-boom-say-investing-experts/news-story/7a40df4f96d5770cf0176fa4e6429418

– Want help building your property portfolio? We’ll show you how to build a passive income of $83,200 pa with only 4 investment properties click here