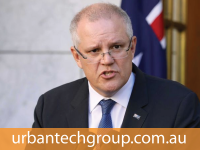 Prime Minister Scott Morrison has voiced his support for the broker channel and outlined their important role in the mortgage market.

Following his address at the National Press Club yesterday, Prime Minister Scott Morrison was asked questions from the floor.

During this question session, Mr Morrison was asked about his stance on mortgage brokers, given the radical changes put forward by Commissioner Hayne in his final report for the Royal Commission into Misconduct in the Banking, Superannuation and Financial Services Industry.

The Prime Minister said he was puzzled by Labor’s response to the royal commission, in which they agreed to the recommendations before they saw it, adding it was “unwise”.

“I commend the royal commission for the outstanding work that they’ve done. But I don’t think they would expect the government to just, sight unseen, say they were going to support all the recommendations. I never understood them saying that and now they find themselves boxed in.”

‘We want to make sure that Australians still have access to that service’ He continued: “We have the Productivity Commission report on mortgage brokers which basically says: ‘If you start turning that industry on its head, you just hand the power back to the banks’.

“Now I don’t see how that achieves our objective, and that is why we have been extremely cautious on that point and that is why I’m not surprised that mortgage brokers are very angry with the Labor party.

“And these are tens of thousands of small and family businesses that help mums and dads get a good deal on their mortgage so they don’t have to just face the banks themselves.

“It’s a pretty important service. We want to make sure that Australians still have access to that service,” he said.

“Now, what Bill Shorten is going to do, who knows? He still hasn’t responded to the royal commission report.”

A pledge to brokers

When asked to talk directly to the mortgage brokers of Australia about the changes, he said: “Mortgage brokers understand, with the cautious way we’ve responded to this report, that we understand the important role that they play in the community.

“Yes, the royal commission has recommended some changes that will need to be absorbed over time, and those businesses can absorb those over time if they are done in consultation and we work together. But I want to see as many mortgage brokers in this country five years from now, in fact, more than there are today.

“I don’t want to see this sector wither on the vine and be strangled by regulation that would throw them out of business, but more importantly, would deny choice and competition in the banking system.”

The Prime Minister continued: “If there is one thing that we have learned through this process, it is that we need more competition. We need more options. We need more choices. Not fewer. And that is what the Treasurer and I are concerned about in terms of how we would go forward on that one recommendation [on broker remuneration].

“So, they have my pledge that I get how important they are to Australia, Australian families, and Australians who want to buy a home and we will work closely with them [so] that we deal with the things that we need to deal with. And many of those mortgage brokers have told us there are things they need to deal with. And that is fine. But we will do it in a partnership way that makes the sector stronger, not weaker,” he said.

The Prime Minister was also asked whether he would like to see anyone from the banking and financial services industry go to jail following the final report from the royal commission, to which Mr Morrison responded: “In this country, it is courts that determine that. That is how it works.

“Everyone should face responsibility for their actions and be accountable for what they have done. And matters have been referred off for those cases to ASIC and the other regulators to take forward and they will be pursued and they will end up in court, I have no doubt, and then courts will decide. But what I do believe, is that all of them have to be accountable for their actions.”

He continued: “So, what can I do about that? I don’t run the courts. But I can introduce a piece of legislation called the Banking Executive Accountability Regime, which for the first time in this country, makes senior bank executives accountable, directly and personally, for the decisions that they make whether they are criminal or not, whether they have a negative impact in a serious way against Australians, small and family businesses around the country, and that legislation enables APRA to run them out of town so they can’t go and work in another bank and do the same thing again.

“I can set up the Australian Financial Complaints Authority… and I can make sure that they can take cases going back now 10 years (over the same course that the royal commission was looking at) so they can get access to their justice too. And that is happening now as we speak.
“So there are a lot of actions I can take to ensure that people face accountability and face justice and we are taking those actions,” he said.

The Prime Minister and former Treasurer added that the appointment of Daniel Crennan as ASIC’s deputy commissioner and “chief litigator” formed part of government’s moves to see ASIC “pony up” and “go to the line, take these things to court”.

“Dan Crennan is a very good litigator and I’m sure will be doing an excellent job. So, yes, I want to see people face consequences for their actions,” Mr Morrison said.

HOW YOU CAN HELP SAVE MORTGAGE BROKERS

Our industry is working very hard to ensure that mainstream media, consumers and policy makers understand the full ramifications of the recommended changes.

We also need your help to make sure policy makers understand the critical role mortgage brokers play in driving competition, choice and access to credit, and what a world would look like without them.

Thank you for your support!

PS. There is a lot of water to go under the bridge before [and if] these recommendations become policy or even legislation. Until such a time it is business as usual! As your trusted mortgage broker you can continue to rely on us to get you the best deal on your loans.